I you have a lot of Programs installed, or you work with many applications, its often hard to find the icon of the desktop or always to type in the Name in the Search Box of Windows. Why just launching an application or open a folder with an keystroke. The application launcher does exactly this. I wrote this program in German language. The user interface of the program is now available in English, but I'm still working on the help. So the only part of the help which is in English is this, the Quick start-Guide, but i think it provides you all information abut the basic usage of the program.

How it Works? Once installed as an Auto-Run application the Launcher is only visible as an Lightning-Symbol in the system tray. It now waits on a registered Shortcut. Normally you use one which is not used in any other Program (CTRL+ALT+F12 is the default shortcut). Once you type it, you see a small blinking window, which says you "I'm waiting on your command". Now you type in another Char. This is used to find the application you want to launch. You set it in the program. For example you type in "C" to launch chrome, "O" for Microsoft office". Its possible to launch applications, start documents (with associated programs) or open Folders in the Explorer.

It sounds a little bit complex, but once you have set up your list, you simply do just this: Press CTRL+ALT+!2, then "C" → Chrome is there!

The following is the Quick start Gide of the help

First start the program. If you see no window, don't panic! The Application Launcher is normally only a icon in the system tray. You only have to click on it when you set it up, normally only once. But lets start to do this. Click right on the icon and you get an Popup menu. Choose from this First "Settings", which opens a Submenu. In this Submenu you choose "Settings Dialog" which opens the main Windows for the Settings. The other topics allow to jump to Menus directly.

You get this Window:

To avoid starting the Launcher every time manually and perhaps forget this, our first task is to install it in the Auto-Run Menu of Windows. For that you just have to click on the button "Auto run". You get a message which informs you about the success or failure.

The key-combination which activates the launcher can be changed in the Shortcut-Field. The default setting is CTRL+ALT+F12. I've work with it since 2002 and hat no problems with it. For this example we change it to ALT+F12. Click in the Edit field and then press ALT and F12 simultaneous - you see the new Key is accepted.

So, now we have to add the programs we want to launch with just one key. for that we click on the Edit button which opens the main Window for the entries: At the first Launch it is empty and look like that: 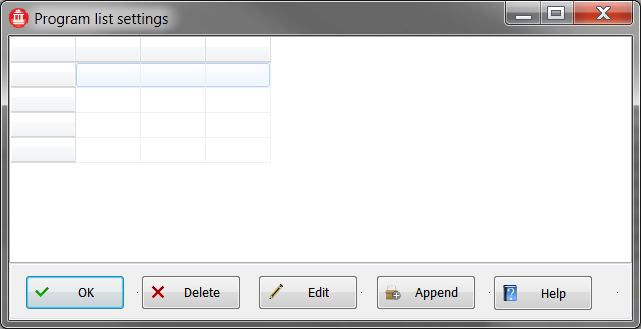 For the first example we want to launch an application. Every Time we press "N" when the launcher is active, Notepad should be started. Click on "Append". Another Dialog appears: 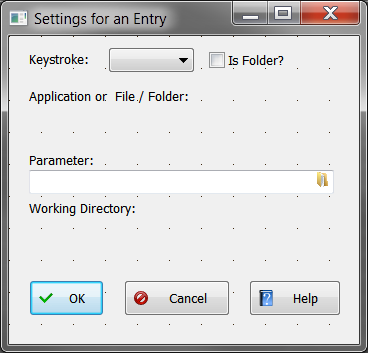 First select "N" form the Drop-Down List to set the key which launches the application. You can use the alphabetic characters A-Z (Caps are ignored), the Numbers 0 to 9 and the 12 Function Keys.

Click on the three Points right of the Edit Field "Application or File / Folder" and navigate to the Windows Menu. Choose there "Notepad.exe"  (Full path normally  C:\windows\notepad.exe"). You can insert Paths also by typing them in.

Close the Dialog with OK. You see now your first entry in the list. If needed you can add in the dialog parameters which the application processes at launch or set the working directory. Also you can open an document instead of launching the application. Then the document will be opened with the associated application.

At second example we want to open the temp Folder in the explorer. For this example the folder C:\TEMP. If you don't have this Folder, just choose another.

Normally you would add the entry, But for learning the program you now double click on the last (empty) Line. This activates Editing of an entry, also achievable by click on the "Edit" Button after selecting a row.

The task in the dialog is nearly the same. You only have to select the key "T". Then to change the Mode of the File/Folder Choose Dialog you activate the Checkbox "Is folder". In the next Dialog you can now only choose Folders. Now you choose here "C:\Temp". Then you can close the Dialog. Close the List window too and click then on Minimize in the Settings Windows. This hides the visible Windows. The Application Launcher is only visible as an icon in the system tray.

Now use it. You can have other programs opened and in foreground, this is no problem.

First type in "ALT+F!"". You get a blinking small window in the left, upper Corner:

It blinks to signal, that the launcher is now active and waits on the keystroke to launch the application. Now hit "N" - and Notepads opens Another Test, Press Alt+F12 and T short after, (you don't have to wait for the Window, but it would be there in a fraction of a second) and the Explorer opens the Temp Folder. Congratulation. You have mastered the first step and learned the basic use of the Program,. You can now add other favorite Applications, tune the program - and save a lot of time in the future.

If you get an alert from your antivirus software, when you start one of my programs, this is a false alarm, caused by a post-mortem module, that reports crashes and errors. You can find more information about this on this page.

The Application launcher runs under Windows XP, 7 and 8. If you like the program, you can donate via PayPal.

Other programs with an English user interface from me:

RandomCopy: Create a unsorted song list for your Mp3 Player.

Launchlog Converter: A program who creates a database form the published launches by Jonathan Mc. Dowell. this can be used for Searches, Summarizes and statistics. Which can be exported as HTML, CSV or Charts can be created.